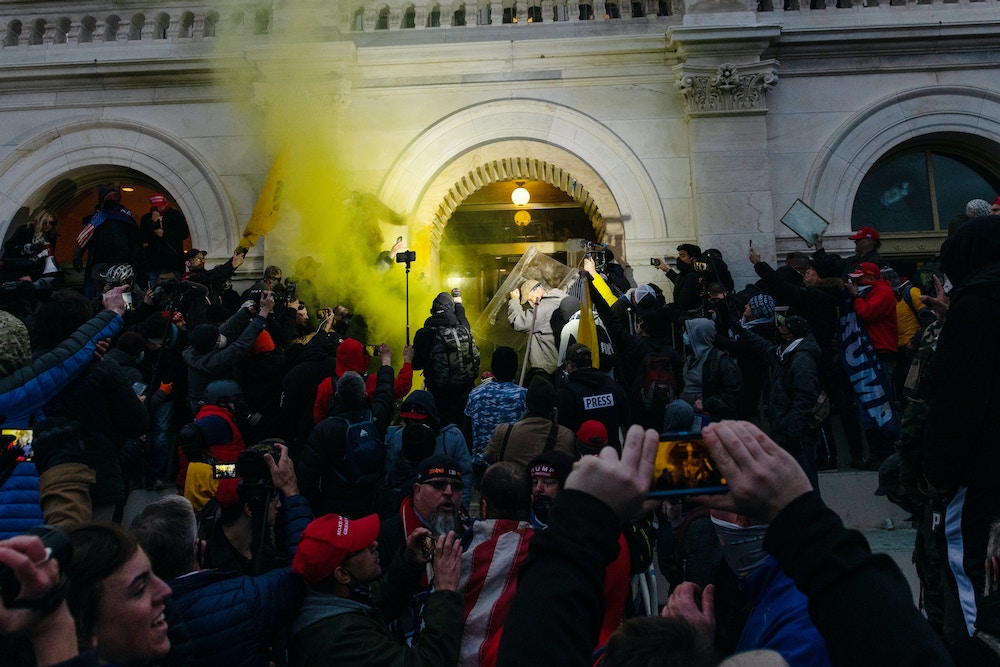 Law enforcement use a smoke grenade to push back protesters at the U.S. Capitol building in Washington, D.C., on Jan. 6, 2021.

It was the winter of 1991, and the country I was working in, the Soviet Union, was months away from its demise. Yet the collapse, so close, was unimaginable.

Moscow was frigid and miserable. The currency was a wreck, stores had empty shelves, and the Kremlin seemed more of a ghost ship than command center. The country’s Baltic republics were seeking independence, and when I reported on the violence that had already occurred there, struggle and darkness were all that seemed possible.

I was visiting the Soviet Union to help my overworked colleagues from the Washington Post, and on one of my first nights, I had dinner with a few correspondents who lived in the country and knew what was going on — or were supposed to. They talked of a grim era ahead in which the KGB and the Soviet Army would rule the country, because its leader, Mikhail Gorbachev, was losing control; his reforms unleashed only discontent and poverty.

A few years later, after the Soviet Union was no more, I wrote about that dinner and what would have occurred if I had known the future and told my friends about it. “If I would have suggested that, in six months, hard-liners might stage a coup against Gorbachev, and that the coup would fail and that the Soviet Union, which we all had grown up with and believed to be immortal, would die on the spot, breaking into bits and pieces with names like Kyrgyzstan and Uzbekistan, my colleagues would have laughed and wondered whether my water glass was filled with vodka.”

One year after the storming of the U.S. Congress, it’s a good time to recognize that we are no longer observers of the distressed futures that afflict other people. We are those people now. It is we, not the out-of-luck them, who are at the mercy of nightmares. So today is a good day to understand what that means.

A Lithuanian demonstrator runs in front of a Soviet tank during an assault on the Lithuanian Radio and Television station in Vilnius, Lithuania, on Jan. 13, 1991.

I am a glutton for dystopia. While covering the war in Bosnia, I read J.G. Ballard’s “High-Rise,” a 1970s novel about a luxury apartment building in London where the residents devolve into war against each other, begun by a dispute over a loud party. I can’t remember why I chose to read Ballard, but the first sentences of “High-Rise” spoke to what I was learning in the Balkans about the ways societies slip, without knowing it, into the realm of nightmares:

Later, as he sat on his balcony eating the dog, Dr. Robert Laing reflected on the unusual events that had taken place within this huge apartment building during the previous three months. Now that everything had returned to normal, he was surprised that there had been no obvious beginning, no point beyond which their lives had moved into a clearly more sinister dimension.

Even as Sarajevo suffered its first casualties in April 1992, during a peace march, lots of people still couldn’t see what was in front of them: a genocidal war by Serbs against Muslims. There were plenty of flashing red lights before the shooting started, years before it started, in fact — the death of Yugoslav ruler Josip Broz Tito; the publication of a nationalist tract by the Serbian Academy of Sciences and Arts; the rise of Slobodan Milošević — but what did these things mean, what was the future they foretold?

These questions lead me to another book I read during my time in the Balkans, this one about the Balkans. Though Rebecca West’s “Black Lamb and Grey Falcon” is a classic that was published in 1941 and elicits some groans nowadays for its Serbian orientation, it has a line from its narrator that remains a truth bomb: “In writing this book I have been struck again and again by the refusal of destiny to let man see what is happening to him, its mean delight in strewing his path with red herrings.” These red herrings are somewhat universal: the plans we have, the dreams we covet, the delusions we nurture.

It would be wrong to punish ourselves over our inability to see the future. Who could be expected to realize that it wasn’t just a reality TV star but the next president of the United States who rode down an escalator at Trump Tower on June 16, 2015, and implausibly announced, as he described Mexicans as rapists, that he wanted to be the 45th commander in chief? For that matter, how could a young reporter in Budapest in 1990 foresee that the cool 20-something anti-communist activist he interviewed from time to time, just elected to parliament, would become a racist and antisemitic prime minister one day? (The cool kid was Viktor Orbán, and the young reporter was me.)

Bosnian soldiers engage in house-to-house fighting in Sarajevo on June 24, 1992.

The warning lights have been flashing in America for a long time. We could start in 1619 or 1789 and jump forward 200 years to Lee Atwater, Ronald Reagan, and Rush Limbaugh, for instance. What I saw in the Balkans makes me think the emergence of Fox News in 1996 was the trigger mechanism for our current predicament. It’s hard to overstate the necessity, if your goal is national madness, of mainstreaming racism and hatred — a function that was fulfilled by Radio Television of Serbia before the Bosnia war.

The late Miloš Vasić, one of the most fearless journalists in Serbia during the 1990s, chronicled his homeland’s descent into extremism and corruption. Vasić knew that the great unwinding in the former Yugoslavia was not a unique phenomenon. “All it took was a few years of fierce, reckless, chauvinist, intolerant, expansionist, war-mongering propaganda to create enough hate to start the fighting among people who had lived together peacefully for 45 years,” he said in 1993. “You must imagine a United States with every little TV station everywhere taking exactly the same editorial line — a line dictated by David Duke. You, too, would have war in five years.”

The Murdoch family, which owns Fox News, has required more than five years to create an actual war in the U.S., but the network’s millionaire hosts are not without results, and they remain hard at work encouraging their mostly white viewers to be the worst they can be and feel like patriots. I think Vasić, who died last year, would have a lot of wisdom to share about our January 6 anniversary, and some of it would revolve around Americans finally seeing they are not the well-mannered exception to internal calamity that they liked to believe themselves to be.

While it’s too much to expect we can foretell our future, we can know from the multitude of flashing lights that we have slipped into what Ballard would instantly diagnose as a sinister dimension. And our journey is not complete. Aleksandar Hemon, the Bosnian American writer, put it well: “What the actual resolution might look like, I fear to envision, but I know it will not resemble anything Americans can remember or dare to imagine.”

The fortunate thing is that we don’t need to know precisely what the future holds. History, and the presence of 20 million assault rifles in America, provides us with enough data to know the outlines of what’s ahead if we continue to pretend that nightmares are for other countries, not ours.