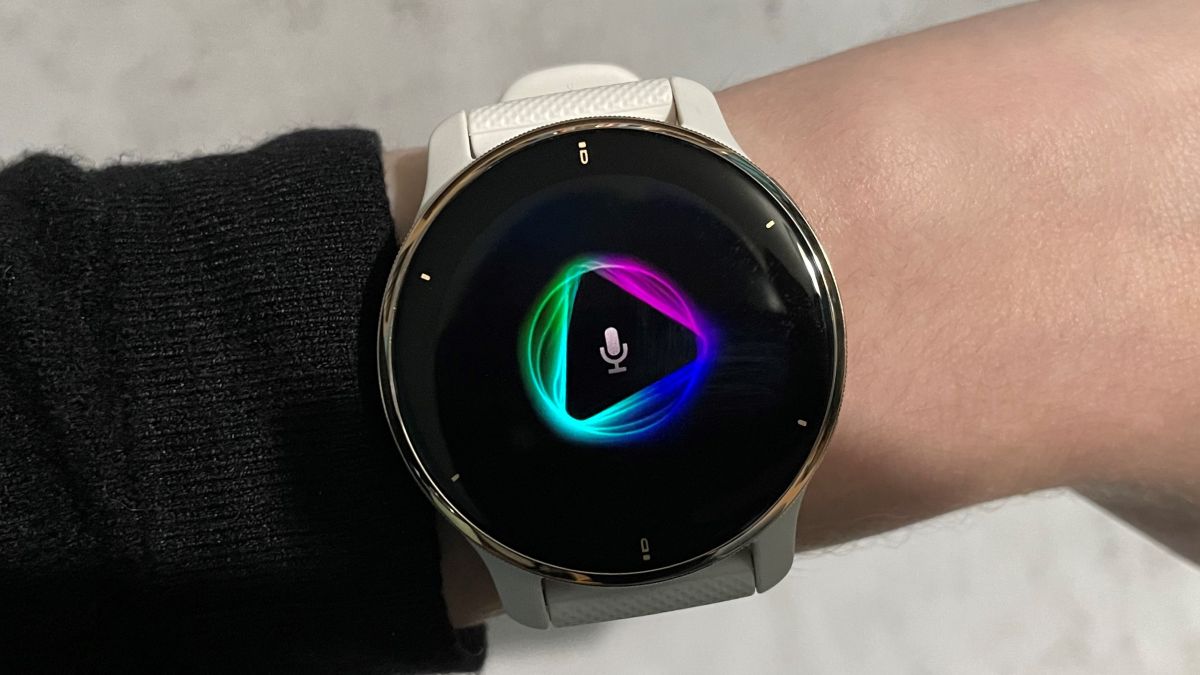 The Garmin Venu 2 Plus is a successor to 2021’s Garmin Venu 2, and has all the same features with one major addition: a microphone. This allows you to answer incoming calls from your wrist, and use your phone’s voice assistant without touching your phone. It’s compatible with Siri, Google Assistant and Bixby, and it’s a great addition to what was already an excellent smartwatch.

You’ll need to pay a little more for the added voice functionality – the Venu 2 Plus costs $50 / £50 / AU$70 more than the original – but it’s definitely not just a gimmick. Whether we wanted to make a quick translation to another language, control a smart home device, calculate a tip for a bill, or control our music app, the ability to simply press a button on the watch we were already wearing meant we ended up using our phone’s voice assistant much more than would have done previously. It might seem like a small feature, but it’s a genuinely useful one that makes this excellent smartwatch even easier to recommend.

Like the original Venu 2, the Venu 2 Plus is an excellent all-purpose smartwatch, and a solid choice if you’re looking for a single device that you can wear all day whether exercising or not. Its stainless steel case and sharp, bright display mean it looks smart enough for pretty much any occasion, and although it only comes in one size, its mid-sized case should suit most wrists.

Garmin has also made the most of the watch’s bright, high-res display with on-screen muscle maps that show the groups you’ve worked recently, plus guided workout animations for yoga and Pilates. It’s a smart addition that makes the Venu 2 Plus well suited to anyone who wants to branch out into a new activity and bolster their existing workouts with strength and flexibility training.

There’s scope for Garmin to add more guided sessions in future, and the company has a track record of supporting its devices with software updates long after their initial launch, so we’re expecting this feature to become even better in the coming months and years.

If you want the most advanced tools, such as live turn-by-turn navigation or training load assessment on your wrist then you’ll be better served by a watch like the Forerunner 945 or Fenix 6, but for everyone else the Venu 2 Plus is easy to recommend.

The Garmin Venu 2 Plus is almost identical in design to the Venu 2, but while the original watch came in 40mm and 45mm versions, the Venu 2 Plus is only available with a 43mm case. It’s a good compromise; large enough to house the new watch’s extra components, but not so big it overpowers smaller wrists.

The new components in question relate to the watch’s new microphone, which is positioned on the case’s left-hand edge. The right edge has a new button, which serves as a shortcut to your phone’s voice assistant. It’s a welcome addition; having to just hold a button for a second rather than browse through menus means you’re much more likely to use it, and while testing the watch, we found ourselves using Google Assistant far more often than we would normally.

Like the Venu 2, the Venu 2 Plus has a water resistance rating of 5ATM, making it suitable for showering and swimming, but not high-speed watersports or diving.

It weighs 51g, making it slightly heavier than both the 40mm and 45mm Venu 2 models (which weigh 38.2g and 49g respectively). It’s not a difference that you’ll notice in everyday wear, though.

The watch is charged using the same proprietary USB-A cable as the rest of Garmin’s current watch lineup. It plugs into the back of the watch case easily and stays securely in place, though it’s not as convenient as wireless induction charging.

The Venu 2 Plus has a bright, high resolution AMOLED touchscreen display, which feels smooth and responsive in use. It has an always-on mode, though this puts a big dent in battery life.

As always, battery life will vary depending on how you use the watch’s various features – particularly SpO2 and GPS. According to Garmin, the watch lasts up to nine days in smartwatch mode, up to 10 days in battery saver mode, up to eight hours with both GPS and music, or 24 hours with GPS and no music.

We used the Venu 2 Plus with all-day pulse ox deactivated and tracked one daily workout, and we found that the battery drained at a rate of around 10% per day, which exceeds the stated figures and is very respectable for a powerful AMOLED smartwatch. To put it into context, the smaller-screened Fitbit Charge 5 has a maximum battery life of just seven days.

It’s not quite as impressive as the 46mm Huawei Watch GT 3 – a similarly specced watch that can run for up to a fortnight on a single charge – but the Venu 2 Plus is nevertheless one of the most power-efficient watches of its type.

As mentioned earlier, the chief difference between the Venu 2 and Venu 2 Plus is the addition of a microphone. This allows you to use your phone’s voice assistant, and make and answer calls provided your handset is within Bluetooth range.

Sound quality from mic is impressive – your voice is easy to hear during a call, and we had no trouble getting Google Assistant to understand our requests in our trials with the watch connected to an Android phone. In fact, the convenience of having Google Assistant effectively on our wrist meant we found ourselves using it much more often than we would usually, even when we weren’t working out.

The ability to make and take calls isn’t just convenient either – it’s also a welcome safety feature that comes into its own in places where you’re worried about your phone being snatched, or you can’t easily reach it in a hurry. In an emergency, you can also use a shortcut on your watch to reach a contact automatically, and activities like running and cycling have automatic incident detection that kicks in when the watch detects a fall.

If you don’t want to be disturbed, you can send an automatic text response to incoming calls and messages. There are lots of preset options to choose from, or you can create your own in the Garmin Connect app.

If you’d prefer to run without your phone, there’s on-board storage for up to 350 songs. Alternatively, you can use the watch to control music playback on your handset via Bluetooth.

There’s also support for contactless payments (something that’s missing from one of this watch’s main rivals, the Huawei Watch GT 3). Our UK-based bank isn’t one of those supported, so we weren’t able to test it for this review, but it’s compatible with a huge range of banks in the US, plus public transport services.

As you’d expect from a Garmin watch, the Venu 2 Plus is a superb sports watch, and although it doesn’t offer the advanced training tools of a top-end Fenix or Forerunner, it’s well suited to beginner and intermediate athletes.

The company’s latest optical heart rate monitor is particularly impressive, offering all-day tracking and responding very quickly to changes during interval training. We put it to the test in several tough spin sessions, and the results matched those from a chest strap heart rate monitor almost exactly – though you can also link a chest strap to the Venu 2 Plus using ANT+ if you prefer. It’s possible to hook up a running pod this way too, or link a Garmin Edge bike computer or Varia lights.

GPS is also superb, and tracked our measured 5k running route to within 100 meters (a difference that could be accounted for by the fact it’s on public roads rather than a track).

Although you don’t get real-time turn-by-turn navigation as you do with Garmin’s top-end sports watches, the Venu 2 Plus does have a return-to-start feature, which is extremely handy if you’ve been exploring a new area during a workout. Before you begin, select Navigation from the menu, and the watch will use GPS to lock onto your current position so you can make your way back when you’re ready.

One of the Venu 2’s best new features was the addition of on-screen muscle maps, which show which body parts you’ve been working recently, plus animated Pilates and yoga workouts that you can follow in real time. It really makes the most of the watch’s big AMOLED screen, and although there are only three Pilates and three yoga sessions to follow at the moment, we’re hopeful that more will arrive with a future firmware update.

Garmin Connect remains one of the best designed fitness tracking apps around, and if you’re upgrading to a Venu 2 Plus from one of the company’s earlier watches, you’ll find that all your data is synced seamlessly. We had no issues connecting the new watch; just open Garmin Connect on your phone, select ‘Garmin Devices’ from the menu, and follow the on-screen instructions.

Upon opening the app you’ll be presented with a dashboard showing all your latest biometric data. By default this includes body battery (a measure of how much energy you have for the day based on sleep and activity patterns), heart rate, sleep, stress, intensity minutes (time spent engaged in physical activity), steps, calories, SpO2, and respiration. All of these are fully customizable though, and you can rearrange the various tiles, remove any that don’t interest you, or add others such as  period tracking, hydration, and weight.

Garmin has really improved its women’s health tracking in recent years, and you can monitor your monthly cycle in the Garmin Connect app, and on your Venu 2 Plus. The app will warn you when your period is due to start (accurate to the day in our experience), and prompt you to log symptoms throughout. There’s also a pregnancy tracking feature, though we’ve not tested this ourselves.

Tapping on any of the cards in the daily dashboard will take you to a more detailed analysis screen, where you can browse through your most recent stats as well as historic data. Unlike some other watchmakers, Garmin hasn’t locked any of its analysis behind a paid subscription, and everything is available to view at a glance with clear charts and extra information to put the stats into context.

Garmin Connect also gives you access to free training plans, including ones for running and cycling that allow you to set a goal (such as running your first 10k), plot a weekly schedule for you, and adapt on the fly according to your performance in training sessions. You can also tweak the plan along the way, so if you need a day off, the app will rearrange your scheduled workouts to fit around that.

Garmin Connect is compatible with all the major third-party fitness apps you’d expect, including Training Peaks, Strava, MyFitnessPal and Zwift, to name just a few. Linking apps is straightforward and your data will be synced between services automatically with no input from you.

You can download extra apps, faces, and data fields for the Garmin Venu 2 Plus through Garmin Connect IQ. As you’d expect, the vast majority of apps are based around fitness, and the overall standard is impressive; many were developed by people with a real passion for their specific sport – whether it’s running, cycling, Crossfit, or something else – and a lot of effort has been put into giving you the most relevant information. You can also use Garmin Connect IQ to design your own simple watch face using a photo from your phone.

The whole experience is easy to familiarize yourself with, and allows you to get the most from the vast amount of data harvested by your Venu 2 Plus every day.

Don’t buy it if